Not long ago, I purchased some LED spots from Thomann. Of course I wanted to control them somehow. Thus, I bought an USB-to-DMX-interface and a fitting adapter cable, too. And I started to learn, how to use QLC+.

QLC+ is an Open Source software for stage lighting control using DMX512 and other protocols.

While playing with QLC+ I discovered a video shared by it's main developer. This video shows an LED matrix controlled using QLC+.

And I thought: I want that too!

I started looking for affordable LED stripes with individually controllable pixels. I found some on eBay; Basically, there are four different kinds of stripes around differing in the chips they deploy:

The WS8201 communicates using SPI. For that kind of stripe there is a tutorial how to drive it using a Raspberry Pi. That's likely to be the means of control the QLC+ developer Massimo Callegari used.

I decided to buy three stripes with WS8211 with a total length of 15 m because they are cheaper. Those 15 meters hold 900 LEDs. I planned to build a matrix with 75×12 pixels. The stripes arrived the day after, so I searched for an appropriate wooden board and sticked the stripes onto it.

Although a single LED does not consume much energy, a total of 900 LEDs will: 900 × 60 mA will eat up a whole 18 amps, or 216 watts at 12 V. Therefore it is important to supply each of the 12 stripes individually and use a power supply with enough power. Fortunately, I had a spare server power unit and started to solder cables to the stripes: Because neighbouring stripes are pointing in opposite directions, I have same electrical poles next to each other such that I was able to connect them to a common cable:

As the server power unit is an ATX supply, one needs to connect the green (power) cable on the large multi-line plug with one of the black ones (ground) to turn it on.

Connecting the data lines was easy. One just has to connect the middle poles on the ends thereby following the arrows along the stripes. 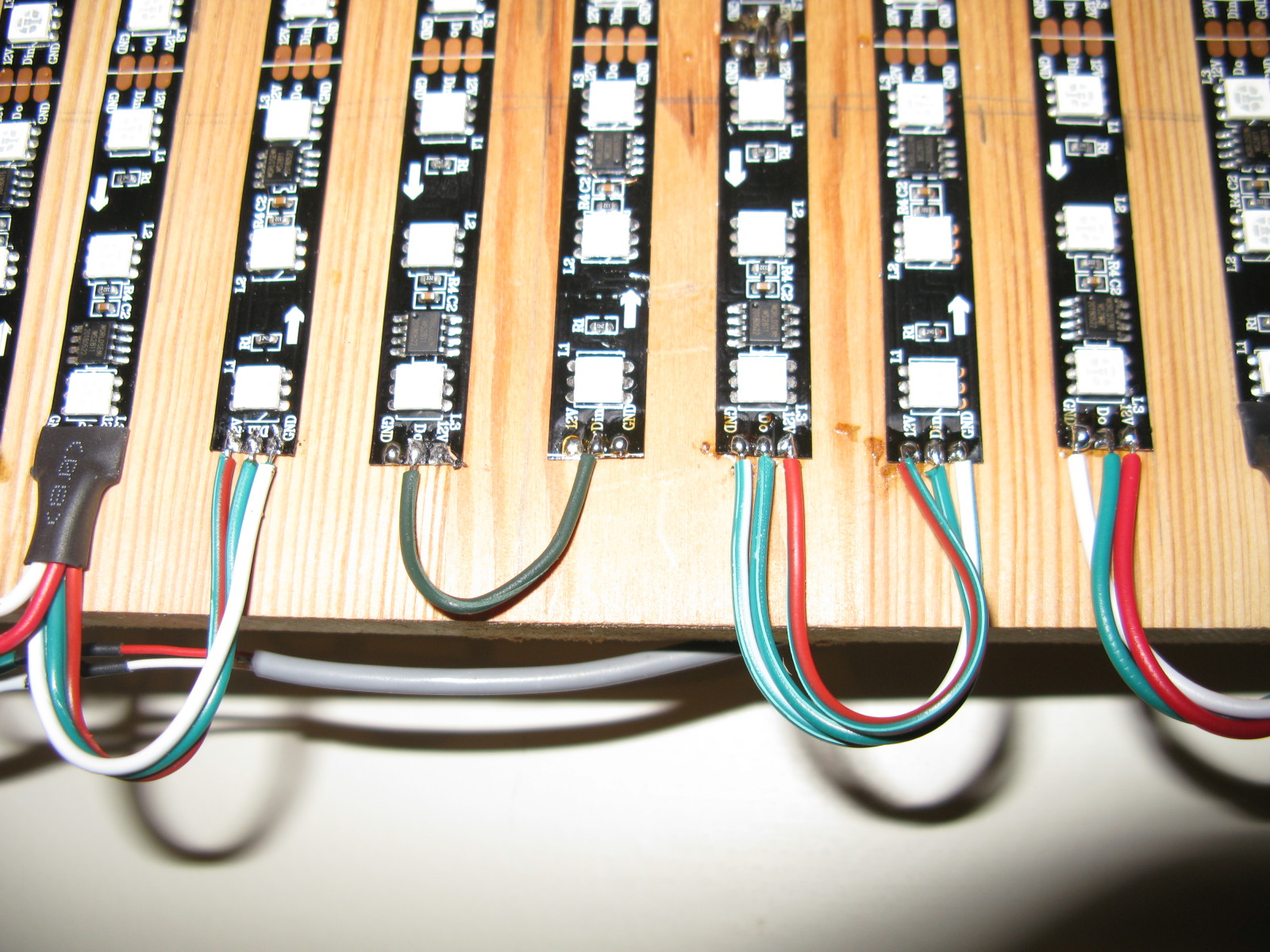 In the images you can see, that on some stripes I also interconnected the power lines. I started to do this before I thought of the power connections and these connections at the ends of the stripes are not required.

Feeding the matrix with data

For a first proof of concept, I wanted to use an already present Raspberry Pi. A short search in the webs led me to a short python program, fitting my needs:

Following the instructions, I connected the ground (Pin 6) of my Raspberry to the minus pole of the LED stripes and Pin 12 (GPIO 18) to the data input connector of the very first stripe segment.

Then I launched the following commands on the Raspberry:

As described in the instructions, I started an editor with sudo nano examples/strandtest.py and adjusted the line
LED_COUNT = 16 # Number of LED pixels. – I have some 900 pixels. Re-checked that the right pin is configured for the data line:
LED_PIN = 18 # GPIO pin connected to the pixels (18 uses PWM!).

And we are set to test the whole thing:

And there was light! But something was odd:

I noticed that I had missed something in the description of the led stripes. On the stripes I purchased, each chip controls three RGB LEDs, meaning my effective resolution was only 300 pixels! Damn!

After a short moment of sadness I accepted that fact and re-adjusted the corresponding line in the script: LED_COUNT = 300 # Number of LED pixels. Done.

The original goal was to control the led matrix using QLC+. I already knew that this software was able to run on the Raspberry and to drive WS201 LEDs utilizing SPI protocol. Now I needed to find a solution to drive WS8211 stripes.

I had different ideas in mind:

As mentioned, I did not master any of these ideas, but I found another solution:

Without any problems, a python program on the raspberry can receive ArtNet packets and control the matrix with a modified version of the Strandtest.Py program!

The resulting Python script can be run easily:

The path rpi_ws281x/python/build/lib.linux-armv7l-2.7/ is to be replaced by the corresponding directory (see → Software installation). The script is tailored for my hardware setup: The LED matrix is divided into two universes, each with 150 LEDs, in QLC+. Those are adressed as ArtNet universes 0 and 1 in the local network. Thus, the script only recieves data from these universes and applies data from universe 0 to the LEDs with index 1 to 150 and universe 1 to LEDs 151 to 300, respectively.

You will probably need to adjust the program for other setups!

For my first tests, I utilized a Raspberry Pi Model 1. With its single core, this device is rather slow. Too slow to process the commands from QLC+ in real time. I transferred the whole software to a Raspberry Pi 3 afterwards. And, well, it works!